Meridian System And Links To Organs 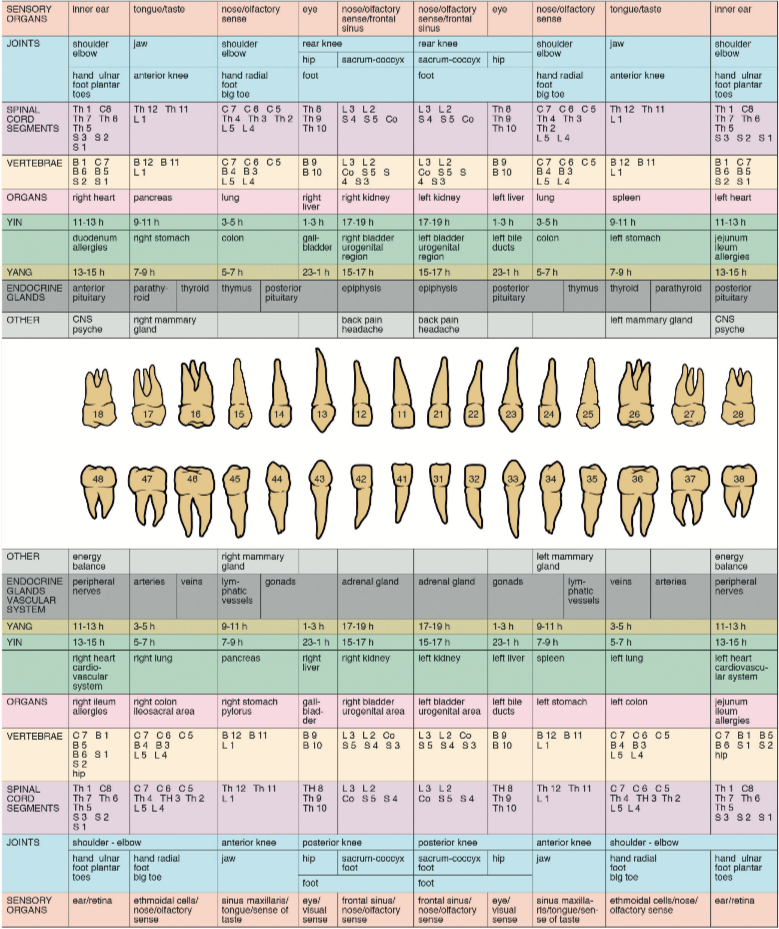 It is so important to be aware of the connection between a disease/symptoms caused by an infected tooth and I have seen my dad so many times identifying relationships between e.g. problems with the visual sense of a patient and the tooth causing this symptom.

Meridian system: The entire surface of the body is covered with a network of energy channels (meridians), which appear through the muscle fascia at certain switching points (acupuncture points) as small, anatomically proven neurovascular bundles. The transmission of information along the meridians has also been demonstrated by injecting radioactively labelled substances at the acupunc- ture points. Each of these meridians traverses a specific tooth or tooth group and is associated with certain ana- tomical structures and organ zones. An inflammation or a disturbance in a specific dental zone thus almost always results in a disturbance in the zone governed by this meridian, and, conversely, in an improvement once the disturbance has been eliminated. If a biological dentist is familiar with the teeth and dental zones that are linked to a particular organ or organ zone, this allows him or her to have a targeted consultation with the patient based on disturbances along this meridian. In turn, the dentist may stimulate improvement along the meridian by means of neural therapy in the corresponding tooth zone. This is a very convincing diagnosis and therapy simulation method for patients, because temporary improvement is experi- enced within a few seconds or within a few hours. Improve- ment may be felt in the arm, for example, despite it being a tooth that received the injection.

In addition to the narrowly defined and precise remote effect of the meridians, there exists a so called myotom, which refers to the oral cavity: C1- C7. Basically all doral disturbances in the mouth appear as neck pains, usually associated with limitations of the mobility of the head.

Accessibility by WAH
Call Us Text Us